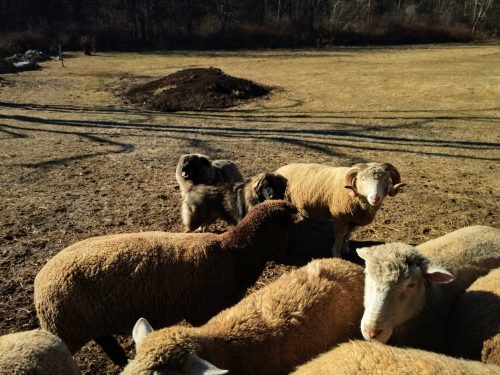 Our pups working their livestock in New England

The Sarplaninac (Sharplanina) Yugoslav Sheepdog is an ancient and probably the oldest breed in the Balkans. Here it was used to guard the livestock and people who lived in the Sharplanina Mountains of the former Yugoslavia, from where the breed got its name. The Sarplaninac received full international recognition in 1939 as the Illyrian Sheepdog and was given its current name in 1957. Because of the harshness of the area in which it was developed, the Sarplaninac is a strong and hardy dog, with a large, bearlike head, muscular neck and powerful body. Its tail is long, bushy and curved like a saber. The Sarplaninac males stand 24 inches and over; females 22½ inches and over. They can exceed 120 pounds. The breed has a long, thick, rough coat and comes in shades from white to dark gray. Our dogs are predominately “Iron Grey.” The Sarplaninac is good natured, calm and stable in temperament. It is extremely faithful to its master and is territorial and wary of strangers. It is an effective guardian  dog for sheep/goats/alpacas. It is a very independent dog and can appear willful (having had to survive in harsh conditions and sometimes without human contact while in the mountains with it’s flock), it will conserve its energy until needed, but yet a hard working guardian and an excellent dog for predator control.  The Sharplanina can work in pairs, one usually taking the position on high ground, surveying it’s flock, while the second acts on patrol.  The Shar is  not recommended for first time pet owners.  The dog standards and additional information can be found throughout the internet and the FCI, UKC and ARBA.

Among the rare species of sheep dog the Sharplaninec is hard to be found today and can face total extinction. It is believed the home of Sharplaninec is Asia, however, other research points to the Balkans as their homeland. The Sars have adapted to the severe terrain, cold winters and scorching summers, of the Kosovo and Macedonian Shar Planina Mountains, and have been living and surviving in this reservation for centuries. It is believed to date back to the ancient Ilyrians and before 1957 was called the Illyrian Shepard. Legends say it was the favored companion of Alexander the Great.

Sharplaninec dogs are well known for their ability to cope well in difficult environments. They are also known to be very dynamic dogs. They have a strong loyalty and committment to their master, and an ability to be very protective when provoked.They are valued for their personality, character, calm temperament, intelligence, balance, courage, independent thinking and good nature.

A hungry scream rips through the wealth
A lioness on the hunt, she prowls the field with stealth.
Flocks are huddled, shaken still — she crouches on the hill
The forest stands in silence as she moves in for the kill!

From the flock the giants rise, giving roar to shake the thunder
Mighty voices unified, Who dares to come and plunder?
Guardians fight back the threat and make their powerful stand
Seek your feast in other fields for Legends Walk This Land!

Wolf pack sings the hunting song — a murmer strikes the air
Moving as one through the field, in search of hearty fare.
Circled round the just birthed doe, calling to and fro
Dazed, confused, she tries to run through freshly fallen snow.

The sentinels rush in to silence wolfen din
They fight the pack with brutal force, the doe theirs to defend.
In unison guardians boast, tread vast around this guarded stand
Seek your feast in other fields for Legends Walk This Land!